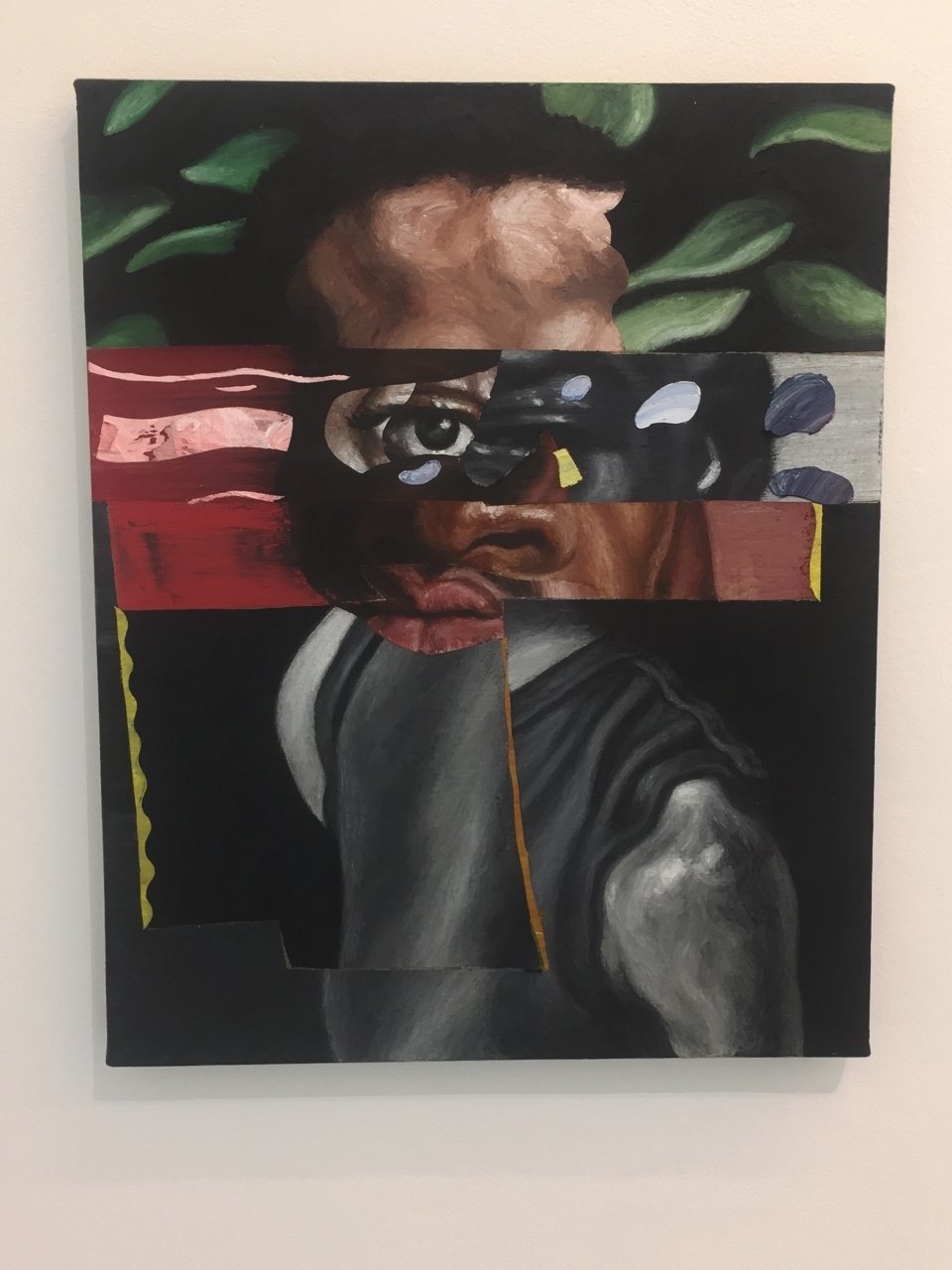 Salon 94 opens its fall season with Nathaniel Mary Quinn’s The Land, marking the artist’s inaugural exhibition with the gallery, and his first large-scale presentation in New York. Quinn’s singular approach to portraiture is both highly associative and autobiographical, and includes family and friends, teachers, neighbors, and interlopers. While tradition has a subject “sit” for a portrait, Quinn’s figures emerge from his own unresolved memory and vision. Thus the work is fueled by intuition, empathy and spirituality, where he aims to “lay down the sensation and opaqueness of my relationships.”

Working in acrylic, charcoal, gouache, oil paint, paint sticks, and gold leaf, he paints hybrid, fractured portraits – balancing between the beautiful and the grotesque, the sinister and the benevolent. Quinn’s sleight of hand becomes more and more pronounced as his figures are further fractured and divided; a Cubist technique of painted trompe l’oeil collage. A Chicago native, Quinn’s upbringing was deeply impactful. Violence, abandonment, and poverty were familiar obstacles in his personal narrative. Combining that history with an exhaustive range of source materials from fashion magazines, news, and advertising, his figures sit in kinetic tension.

The Land is populated by 15 portraits from Quinn’s Crown Heights neighborhood, a diverse, working class black community undergoing rapid gentrification. In the artist’s words, “It’s my desire and mandate to highlight the internalized worlds of residents in my community.” Cultivating relationships over time, a series of complex characters emerge, from a head on portrait of a melancholy matron, Night Model, to a more vague, shadowy figure slinking around a chain linked fence. Greenery is slipped into a few of the otherwise barren backgrounds.

His next door neighbor, known as the Mayor of St. Marks, aka “B” (for Brandon) lives on the second floor of his mother’s house; his sister, along with her husband, live on its the top floor.  “In B’s portrait, there’s a soft, gentle weight imbedded in its form, especially with the sweep of women’s hair, a notation of his personal reality – the prodigal yet dependent son living with two strong and independent women.” B is depicted with a pronounced darting “horse eye” –  highlighting him as an acute observer of the daily movements and transitions around him. The Mayor of St. Marks, like the artist himself, is a gatherer of information who never misses a beat. Theirs is a shared experience, yet of different fates. In Quinn’s words, “I’ve found that the line between my neighbors and I is so tenuous, as to hardly exist.”

Living in Brooklyn, New York, Nathaniel Mary Quinn (b. 1977, Chicago, IL) received his BFA from Wabash College and MFA from New York University. Recent solo exhibitions include Nothing’s Funny at Rhona Hoffman Gallery, Chicago; Highlights at M+B, Los Angeles; Past/Present at Pace Gallery, London; and Hybrids: The Windows Exhibit at the Museum of Contemporary African Diasporan Arts, New York. Quinn’s work will be on view in a three-person show, For Opacity: Elijah Burgher, Nathaniel Mary Quinn, and Toyin Ojih Odutola at The Drawing Center in New York this fall. The artist’s work is in the permanent collections of the Whitney Museum of American Art, New York; Los Angeles County Museum of Art; Museum of Contemporary Art, Los Angeles; The Art Institute of Chicago; The Hammer Museum, Los Angeles; and the Brooklyn Museum, among others.  Quinn joined Salon 94 in 2017.